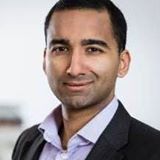 Vishnu Amble is a senior investment professional with Aramco Ventures, focusing on investments across stages in core and critical infrastructure industry digitalization, diversification, and decarbonization.

Over his nearly two-decade career as an investor and financier, Vishnu has worked on private equity, infrastructure, growth, and technology venture investments across the globe.  Further, he has led or been involved in over 35 technology investments relevant for the core and critical infrastructure industries, as an investment professional with such groups as E.ON, The Carlyle Group, The GCC Clean Energy and Technology Fund, & The Abraaj Group.    Vishnu started his career with Lehman Brothers as an investment banker focused on M&A and financing transactions in the Power, Utilities, and Infrastructure sectors based in the firm’s offices in London, New York, and Hong Kong. Vishnu received his degrees in Economics and Computer Science Engineering from the University of Michigan – Ann Arbor.  He has served on various corporate and non-profit boards, as well as various Limited Partner advisory committees across the globe.