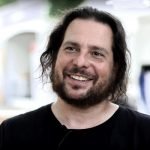 Sylvain has spent the last 25 years thinking, writing, building, and investing in emerging technologies. Though he didn’t study computer science, Sylvain has been hacking with computers forever, and spent most of his career as a startup entrepreneur at the confluence of media, technology, data, and networks. A self-proclaimed nerd, socialist, and pragmatist, Sylvain believes in technology as a means to “save the world” (even if he knows it won’t happen), and loves investing in ideas and people aiming to transform sectors and industries. He served as a General Partner at Real Ventures from 2014 to 2020, where he is still a Venture partner. He was previously Senior Developer Advocate at Twitter and a startup co-founder and CTO in the previous decade.

In 2020, pre-COVID, Sylvain set course on applying his network and insights to the climate crisis, broadening his scope from “only tech” to impact investing. He still believes data and algorithms can move the needle, but he now tries to measure how people’s lives get better. He still believes money is an incredible lever to change the world, and he hopes to catalyze capital for the challenges of today and of the next decades.