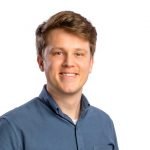 Before joining NextCorps, Chris managed reporters and videographers in multiple roles, including acting as the liaison between Congress and broadcast media at the House of Representatives Radio and Television Gallery and as an assignment editor for Spectrum News Rochester. In addition, he supported the NBC Olympic Broadcast for the 2014 and 2016 Olympic games in various roles.  Chris is a seasoned videographer, and has produced and animated programs for HealthCentral.Com, TheBody.com, WXXI, Grid Alternatives, and The Climate Mobilization. Chris has a B.S. in Television–Radio Media Production from Ithaca College.