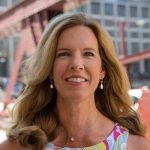 Amy is Founder and Managing General Partner of Buoyant Ventures, a new venture fund in Chicago that aims to invest in digital climate solutions for energy, transportation, agriculture, and the built environment. Her career spans over 20 years of high technology entrepreneurship, private equity, and research. Amy previously founded and led Energize Ventures, a $165M venture fund that invests in digital technologies that optimize energy equipment and infrastructure. She oversaw the Fund’s investment activities and operations. She also co-founded and served as CEO of technology accelerator Clean Energy Trust, which has invested in dozens of early-stage clean energy companies across the Midwestern U.S. She remains involved and now serves as Chair of its Board of Directors. Amy also held roles at private equity firm MVC Capital, helping to open the Chicago office, and at Stanford Research Institute where she worked on an early version of the voice recognition technology that became Siri. Earlier in her career, she was Co-Founder and CEO of a consumer technology company that was funded by Microsoft co-founder, Paul Allen, and that she sold to the Danish toy company, Lego Systems. Amy also helped fundraise for mobile gaming company, GluMobile, on whose board she served until it went public on the NASDAQ.

In addition to the Clean Energy Trust board, Amy serves on the Advisory Board for the WISER Institute at the Illinois Institute of Technology. In 2020, Crain’s recognized her for the third time as one of Chicago’s Top 50 Technology Leaders. In 2019, she was honored by Streetwise as one of the “20 Most Inspiring Chicagoans.” In 2015, she was an Emerging Leader at the Chicago Council for Global Affairs. In 2014, she was awarded the Corporate Citizen of the Year Award from the Executives’ Club of Chicago, and Leading Woman in Technology from the Illinois Technology Association. Amy is a regular lecturer in energy and entrepreneurship at Northwestern University and the University of Chicago’s Law School. She has a B.A. from Stanford University.

Amy lives in Lake Forest, IL with her husband and two teenage daughters.